The Occupational Safety and Health Administration (OSHA) quietly updated its website over the weekend to adjust its policy on whether adverse effects from an employer-mandated COVID-19 vaccination should be counted as a recordable workplace injury.

On Friday, the agency’s guidance released April 21st, which stated that adverse reactions from employer-mandated vaccinations are “work-related,” remained in effect. 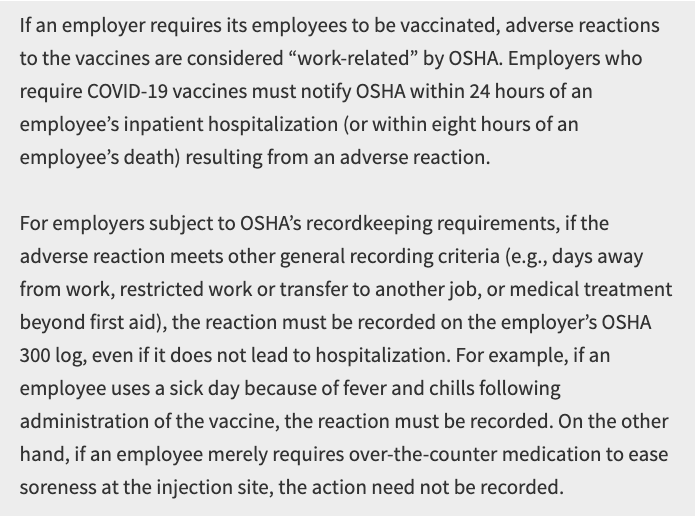 Here’s a screengrab of OSHA’s guidance from Friday, via Google’s Wayback Machine:

On Saturday, however, the agency took an entirely different approach.

After an initial surge, voluntary vaccination rates have hit a wall, and the powers-that-be are desperate to get things rolling again. But should they be? At this point, 73.7% of the population of over-65 Americans have been fully vaccinated against COVID-19, and 85.2% have had at least one dose. These are the most medically vulnerable to the virus, and this rate, along with seasonality and natural immunity, has resulted in plummeting death rates across the country.

Still, one can understand the desire to continue to get vaccination rates up. However, there is a fine line between enticement and coercion. Employers forcing employees to undergo a medical procedure against their will is bad enough, but the government going on to release those same employers from having to pay for any negative effects from that procedure seems like a whole other level of insane.